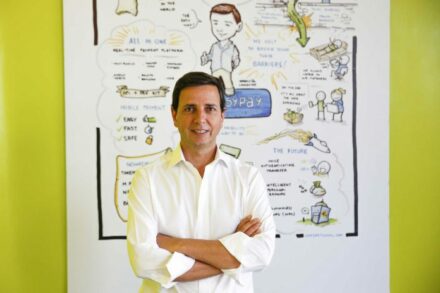 In a single digital platform, easypay combines the most used payment processing options. As cash payments are being progressively phased out across the world, these are benefits for users and merchants.

“What distinguishes us are these three words: simplicity, flexibility and connectivity”. Sebastião de Lancastre, co-founder and CEO of easypay, summarizes why merchants prefer to work with a payment processing Fintech rather than legacy banking corporations.

“What sets us apart from a bank is the proximity to the customer”.

“Because of its structure, the risk it supports and the mentality it lives in, a bank, has more difficulty to adapt.”, he stressed.

Founded in 2007, when banks completely dominated the payment processing landscape, easypay was born with new European Union regulations that extended the market to groundbreaking payment institutions, such as Fintech.

easypay positions itself as a partner that speeds up payments and customer acquisition by making available the most used payment methods in a single platform that merchants can easily integrate with any open system. Ranging from Visa and Mastercard to ATM, direct debits and instant transfers.

Currently, easypay processes over 400 thousand payments per month, has over 6,500 customers and closed 2018 with a payment volume of 177 million euros. This means that easypay has grown by 40% compared to 2017.

“We will certainly have banking in the future and it will not be like the one we know today,” said Sebastião de Lancastre, about the future of the financial system.

Fintech has a kind of ‘digital Midas touch’, digitizing everything they touch. Cash payments are no exception to this phenomenon. With the widespread of digital payments, the consequences are spreading across society.

Physical currency is being phased out in many countries around the world, essentially because the digitalization of money makes it possible to speed up transactions and increase levels of security against fraud.

In fact, the most recent data from the European Central Bank shows that there is a correlation between the use of digital money and the shadow or parallel economy. According to this study, the countries with the highest use of electronic transactions are those where this under the radar dealing is less prominent.

Fintech has a technological advantage over traditional banks. For example, how many banks can tell a customer how much money they have received from a given IBAN? That fact the banks, to this day, offer so very little data analytics to their customers means there is sizeable room for improvement.

Merchants that entrust their payment processing services to a Fintech such as easypay are likely to experience a new level of customer experience, unheard of in traditional banking. Get in touch to find out how we can help.

Cashless payments are here to stay

What does it mean for easypay to be PCI Compliant?

Your business grows with easypay

We simplify complexity with payment solutions that optimize your business management, save time in payment verification and prepare your company to sell to the whole world.